How to Make the Most of Lifecycle Stages in HubSpot

HubSpot’s Lifecycle Stage property is a way of tracking the buyer's journey in your CRM, enabling each department to quickly access the data it needs to work effectively.

As a HubSpot user, the ability to define lifecycle stages is built into your platform. But that doesn’t mean it’s tailored to your organisation’s needs. In fact, if you’ve never reviewed your Lifecycle Stage property before, you’re likely running off the default settings, which only tell you part of the story. Leads and Customers are certainly important, but as we both know, the buyer’s journey is a little more nuanced than that.

From light-touch categories like Subscriber all the way to powerful Evangelists, HubSpot gives you the functionality to define a variety of additional stages that will help all your customer-facing teams to categorise and better engage with the contacts in your CRM.

In this article, we’ll look at how HubSpot defines lifecycle stages, reveal why they’re so important and highlight the transformative effect that setting up the Lifecycle Stages property correctly can have on a company through a short case story.

What are lifecycle stages?

Think of lifecycle stages as a way to categorise the contacts in your CRM. They’re labels you can use to better organise (and interact with) your company contacts, with applications that range across every customer-facing function. (More on that in Why are lifecycle stages so important?)

If you haven’t reviewed the Lifecycle Stage property in your portal yet, it’s likely that your contacts are being categorised according to the default settings. These are Subscribers, Leads, Opportunities and Customers. HubSpot can confidently recognise contacts who have subscribed to a blog, filled out a form, have a deal associated with them or have a Closed Won deal associated with them as falling into one of these four camps respectively.

But not everyone who fills out a form is going to be a quality lead, and organisations need much more data than simply how many deals have closed in order to function effectively. So while HubSpot’s default settings can provide you with the broad strokes of how Marketing and Sales are performing, you’re going to want to go in and set up the rest of the lifecycle stages properly to elevate your CRM records and unlock the full value of the platform.

Why are lifecycle stages so important?

It’s a tired truth that Marketing is often challenged on the value it delivers. As organisations across the UK review their spending after an unpredictable year, it’s more important than ever that marketing teams can prove the impact they’re having on the company and the ROI they’re generating. A top-level view of leads generated is a good start, but it doesn’t speak to the quality of those leads or how effectively Marketing is nurturing and qualifying them. As we all know, the buck doesn’t stop here. Marketing is just the beginning of a prospect’s relationship with your organisation. Is your CRM capturing that journey?

Sales also needs to be able to track prospects and customers as they move along their buying journey. Is the list they’re working from accurate? Are the prospects a good fit? Are those contacts legitimate prospects or competitors/recruitment agencies/suppliers? And can they quickly and easily report on who is in the early stages of conversation vs. who is a live opportunity?

Customer Service faces similar challenges, yet HubSpot’s default settings don’t go anywhere near this. Leads and new Customers aren’t relevant metrics for a department charged with retaining and growing existing accounts. You can see where we’re going with this. The buyer’s journey isn’t a turn of phrase. Your leads go through a series of steps on their way to becoming a customer and you need to be able to monitor that to ensure you are attracting the right kind of visitors who actually go on to become valuable customers.

In each case, the Lifecycle Stage property can be used to gather and track this information. So how do you set it up? Let’s look at how we achieved this for one of our customers.

The company in question was investing a significant amount of time and resources into its marketing activities. As a result, it was generating plenty of leads on a consistent basis. But not all was well; Marketing was struggling to join the dots between its lead generation activities and revenue closed. At the same time, the movement of contacts through the buyer’s lifecycle didn’t look accurate. Over 90 per cent of MQLs (marketing-qualified leads) were progressing to the SQL (sales-qualified lead) stage, but almost the same percentage was then dropping off between SQL and Opportunity. Unsurprisingly, actual Customers closed were not representative of the MQL figures Marketing were reporting back to the board.

This company had already spent time reviewing its lifecycle stages, but as you can see, the criteria they were using to define each stage was throwing up problems.

Let’s take a look at how they were marking each stage:

Immediately, we can see several problems with this setup. Can you?

For one, Other and Subscriber appear to have been grouped together. In practice, both should mean very different things. As it stood, the CRM couldn’t tell these categories apart. Imagine the confusion that must have been causing Marketing when they attempted to pull the list of Subscribers, for example.

The Lead criteria remain unchanged from HubSpot’s default settings, and the MQL setup looks standard. It is the SQL criteria where things really start to get interesting.

The customer’s Lifecycle Stage property was set up to classify every MQL who has never been a customer, is in a sales sequence and is not in an exclusion list as an SQL. Instantly, it becomes clear why the drop-off rate between MQL and SQL was so low. Almost every MQL that Sales was entering into a sales sequence was being re-classified as an SQL. But in reality, being entered into a sales sequence doesn’t necessarily mean the lead is advancing or that it is ready to have a sales conversation, never mind a buying one. In fact, most MQLs aren’t ready to buy straight away. This then explains why the drop-off rate between SQL and Opportunity was so high. Leads were being contacted too early, which in all likelihood was putting them off altogether.

In a nutshell, near enough every MQL that Sales worked, was being upgraded to an SQL because the criteria defining the SQL lifecycle stage included almost everyone.

“Effectively, this organisation was treating MQLs like SQLs and replacing Marketing nurturing workflows with a Sales sequence. They were disqualifying people more by opting them in too early. There could be lots of great contacts in there who could have become customers in time.” Rachel Ahearne, HubSpot Account Manager

The impacts of this were significant. Not only was the data telling a confusing story, but it highlighted that Marketing and Sales weren’t working effectively together. On top of this, many leads who were actually a good fit for the company but not ready to buy yet were being worked by the Sales team far too early, when really they needed time (and a relevant workflow sequence) to move them naturally along their buyer’s journey at their own pace.

Let’s look at how we helped them re-define the stages:

Straight away, you will see that Other and Subscriber have been reclassified. There is now a clear distinction between what makes a contact Other and what makes them a Subscriber. When Marketing creates Subscriber lists, these will only include contacts who have opted in but not yet filled out another form. (No company employees or suppliers muddying the waters!)

When working with any client in a Sales Enablement capacity, we advocate an ‘Advance, Nurture, Disqualify’ approach (‘AND’) to their lead qualification. This comes into play at the SQL stage and is a way of categorising whether a lead should be ‘advanced’ (a deal is created and the contact moves to the Opportunity lifecycle stage), ‘nurtured’ (Sales wants to nurture them further, so they remain an SQL) or ‘disqualified’ (the lead is not a suitable match and is moved to the Other lifecycle stage). These labels can all be set within one property (AND).

“Sometimes, Sales will come across a qualified lead who otherwise looks like a good fit but is not yet ready to buy. When this happens, Sales might decide to move them back to the MQL stage, where they will continue to receive helpful marketing communications until such a time as they are ready for a buying conversion.”

The SQL stage has been completely reworked. Instead of classifying almost every MQL as an SQL, it now only applies if the contact has completed a BOFU form (e.g. a 'contact us' or consultation request) and they meet Sales’ discerning qualification criteria. Together, these changes mean that contacts classified as SQL as those who both have the potential to be a customer and are ready to have a sales conversation. When it comes to reporting, this is much more meaningful, but will also help the customer’s Sales team to prioritise the right prospects, work leads who are genuinely interested in buying and spend their time more valuably.

3 signs you need to look at your lifecycle stages

Generally speaking, if you’re struggling to generate leads that close, it’s likely a good investment of your time to review the lifecycle stages in place and what criteria they are working from.

Here are three signs Rachel Ahearne, a HubSpot account manager, says to look for as indicators that you might need to review your Lifecycle Stage property:

“It’s a huge waste of time pumping money and energy into Marketing and content if your Lifecycle Stages aren’t properly defined,” Rachel explains.

Think back to the tired old trope referenced earlier on — that Marketing is so often challenged to prove its value. If an organisation hasn’t thought through its lifecycle stages, its marketing team won’t be able to say for sure what’s happening to the leads once they go across to Sales or how they’re being handled.

Are you interested in finding out more about lifecycle stages, or would you like a hand? Drop us a line and one of our team will be in touch to see how we can help you.

Gem is an inbound enthusiast and HubSpot Platform Consultant at BabelQuest, an Elite-tier HubSpot Solutions Partner based in Abingdon, Oxfordshire.
Gem Rugg-Gunn 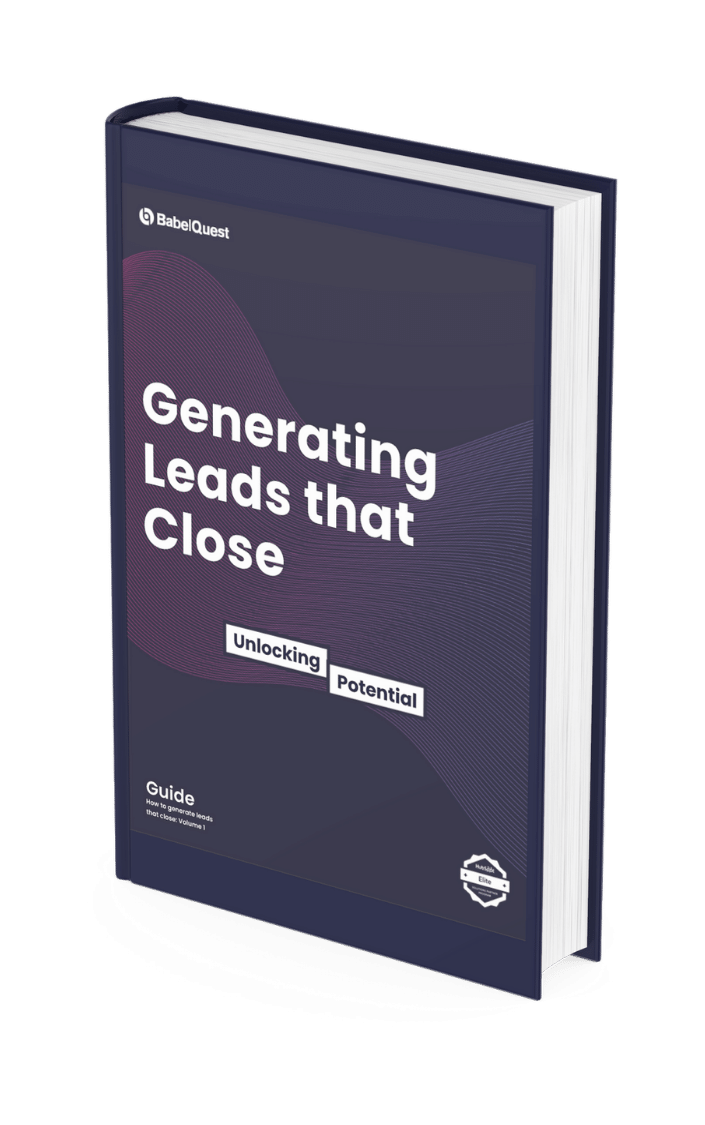