Ask any salesperson and they’ll tell you that no two deals are the same. Every prospect brings their own challenges to the table, their own set of requirements that need to be met.

Often, a well-crafted sales process and thoughtful methodology provides sales reps with a playbook to close deals, but sometimes it’s not enough. Sales reps could be faced with a conversation about a highly customised deal. Perhaps the salesperson would benefit by bringing in expertise from elsewhere in the business to best answer a prospect’s questions and provide the reassurance they need to move forward with the sale.

This is where having a deal strategy in place really pays off, equipping your sales reps with the framework and support they need to improve sales performance and consistently win those unconventional, often higher-value deals.

Related read: Sales Chatbots: Where are the Wins? 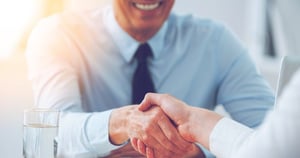 
Deal strategy is extremely varied but is best thought of as building a strategy to win the deal.

‘During deal strategy sessions I’m often asked to review what resources a sales representative is leveraging and make recommendations’, said Ben Cotton, HubSpot’s Principle Marketing Manager for Sales Enablement, when we approached him to share his insights. Over the past two-and-a-half years, he has worked on over 400 deals using deal strategy and other elements of deal support, landing more than three million additional ARR that might not otherwise have closed.

Deal strategy is extremely varied, but is best thought of as building a plan to win the deal.

‘For instance, it may be that the salesperson should call in additional support from their legal, sales engineering, or marketing teams, or that they should consider using sales collateral that speaks to a prospect’s specific challenges or objections. It's not right for every deal but there's certainly a number of deals where reps want this additional support and they value having someone to call upon.’

Discover how sales support contributed to £270K in new business for one of the UK’s leading providers of secure IT infrastructure.


As a sales director, you have a phenomenal opportunity to drive more wins of what might have traditionally been challenging deals—and demonstrate tangible ROI in the process.

‘We  spoke with sales managers and leaders to try to figure out where sales enablement could have the biggest impact’, said Ben, when we asked him how deal strategy came about. ‘We realised deal strategy was an area where we could have the biggest impact. If we could get as close to the win as possible, we could demonstrate the ROI of our sales enablement activity much more easily.’

Deal closing optimisation was an area where you can have the biggest visible impact.

A larger (no doubt familiar) hurdle can often be rolling out new processes across the sales team. Ben had a solution for this, too: ‘Once a month, I remind the sales organisation about deal support, as well as proactively reach out to sales reps working on deals that look like they may benefit from deal support. I also actively encourage those leveraging deal strategy to share their experiences across the team.’


Deal strategy is just one of three ways in which HubSpot is enabling its sales teams around the world to sell more, faster. ‘We spoke with sales reps and we asked them how best we could support them’, said Ben. ‘The insight we received was that sales reps need this on-demand, during-the-deal type support.’ It was this recognition that led to the development of HubSpot's deal support, of which deal strategy is one part.

Over the past two-and-a-half years, HubSpot has worked on over 400 deals, landing more than three million additional ARR that might not otherwise have closed.

In addition to deal strategy, HubSpot’s deal support service includes customer reference calls and the provision of competitive intelligence, both of which focus on empowering the sales team to close the deals they need to make their quota — and grow the business.

Read Ben’s article on deal support — and how it could be your organisation’s secret weapon.


Whether you’re testing deal strategy or rolling out the full range of deal support services across your team, Ben’s advice is to keep it simple. ‘Try not to overcomplicate things. Start deal strategy on a small level and gradually scale it up as you discover what your sales reps need. Keeping it focused is really important, at least at first.'

Start deal strategy on a small level and gradually scale it up as you discover what your sales reps need.

Ben also highlighted the importance of a clearly defined process. ‘At certain points, for instance when setting up a customer reference call, the process is handed over to the rep and I no longer play a part in it. We have a very clear SLA there. Once I've made the introduction, having identified who would be a good fit for the call, the rep is then responsible for making sure the call takes place and following it up. It means there are no grey areas.’

Deal strategy is not right for every deal. However, there will always be scenarios that sales reps have not experienced before. 'That’s where deal support comes in', said Ben. ‘Sales reps value being able to call upon someone who can provide strategic guidance.'

For help improving sales productivity and closing more leads, click the image below and download our free sales ebook.

Tom is BabelQuest's Principal Copywriter. He has a PhD in Creative Writing from the University of Southampton and is a novelist with Sparkling Books.
Dr Thomas Brown